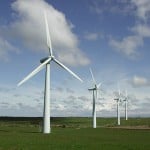 Our friends across the pond (the Atlantic pond, that is) in Minnesota seem to have the ‘green’ thing down to a T, with $3.3 million being spent on environmentally friendly innovations such as wind turbines, as well as residents funding their own solar panels. A wonderful idea, that is until the turbines are foiled by the freezing weather that we’ve been encountering this winter. With blades frozen up, the turbines cannot turn: not turning = no power for thousands of residential and business locations throughout the state; many are suffering without power for their office water cooler, which may be less of an issue seeing as they won’t be parched with thirst in the snow…
Home owners with solar panels are also feeling frustrated at the lack of sun being able to reach them, with thick snow and ice blocking the light getting through. Whilst others are grudgingly shovelling their driveways, these locals are calling on the anti-freeze and a squeegee on a long pole; but cloudy weather and lack of bright winter sunshine are still an issue.
With President Obama banking on thousands of jobs being created by green initiatives such as these, problems arising seem to be slowing down the process of making this happen.
What are your thoughts on this? Get in touch, or leave a comment at the bottom of our blog.