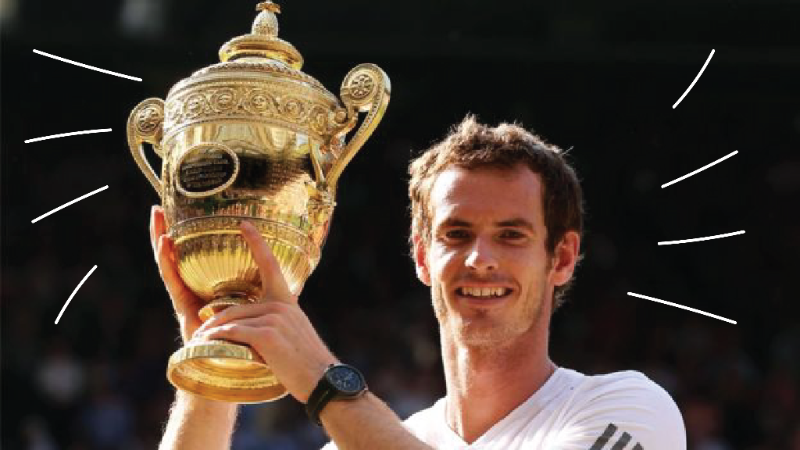 Wimbledon is one of the greatest donning tennis occasions in London. We can happily say that amid this period is going all out with the first quarter effectively done. In any case, don’t move a muscle as there will be more excitement and probably more nail-biting moments to come.

Andy Murray is currently ranked number one in the world. Among this title, he also owns the British number one title, the 2012 US Open Champion, the 2012 and 2016 ruling Olympic Singles Champion and the 2013 and 2016 Wimbledon Champion. We’re not done yet, he was also an individual of the triumphant Great Britain Davis Cup squad in 2015. Whew, Andy…you almost took our breath away!

Andy won his first competition as an under-10 junior at the Dunblane Sports Club and was the first junior major at the US Open. These pivotal milestones clearly show Andy is bound for the best.

In the wake of turning pro in 2005, Andy won his first ATP title and let’s not forget the SAP open in San Jose, after a year. Moving forward two years and seven more tour titles, Andy achieved his first Grand Slam final, the 2008 US Open. However in 2012, having lost in three consequent Grand Slam appearances. Andy turned into the US Open Champion, hot on the heels of a distinguished Gold Medal triumph at Wimbledon amid the London 2012 Olympics.

Andy at that point ended years of British heartache on the same turf only a year later by turning into the first British male in 77 years to win the highly coveted Wimbledon Championships. This took place in London in July 2013. Not having any desire to keep British waiting for another 77 years, Andy was again successful at SW19 3 years later, obtaining his second Wimbledon title in 2016.

“Everybody always talks about the pressure of playing at Wimbledon, how tough it is, but the people watching make it so much easier to play.” – Andy Murray

On his way to his 46th career title and 3rd time Wimbledon champion, we confidently stand behind Andy Murray. Having said that, we might have something special for you! Are you ready? Here we go…If Andy Murray wins his 3rd Wimbledon championship title in 2017, The Water Delivery Company will give you a coffee machine rent-free for 1 whole year! Yes, a whole year.

This model is the ideal choice for smaller businesses which need a fast and efficient coffee machine.

We also stock a range of K-Cups® to complement your coffee machine. Our wide range of coffee pods are sourced from only the highest quality brands so that you experience coffee blends from around the world

Whether it’s one cups or four cups, Office pro Brewing System always guarantees a fresh cup with no water waste.

We have faith in Sir Andrew Barron Murray, do you? If so, show your support and register for the competition, simply pop us a mail at quotataions@thewaterdeliverycompany.com or alternatively call us on 0330 123 3309. We look forward to hearing from you.