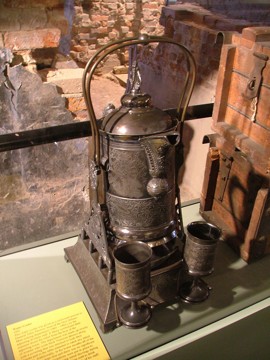 The Water Cooler and the Fight against Typhoid

One of the earlier iterations of the water cooler

If you’re to think about the water cooler, you’re more likely to see it as a source to quench your thirst for water and office gossip. And your point of view would not be far off the mark. The dispenser has played a role in office pop culture, even being featured in films, as the hub where people talk about their weekends and how much they wish it was five o’clock.

However, its significance is as noteworthy in the medical world as it is to your amusement and hydration. Of course, you could say its medical importance is due to the fact that it keeps staff hydrated, therefore healthy. But the modern day water dispenser came into being to fight a far deadly disease that affected millions in the 19th century: typhoid. To understand and appreciate this, you’d have to look in the past to understand.

The early 1900s and typhoid

Typhoid fever or abdominal typhus is a bacterial disease that is prevalent around the world, especially in developing areas, and even more so before and during the 1900s. Spread through lack of sanitation, the affliction can infect anyone who consumes water or food that has been contaminated with the faecal matter, containing a bacterium known as Salmonella enterica subsp. enterica, serovar Typhi contained in an infected person.

Although much of what is known about typhoid today is thanks to its discovery in the 1900s, its documented origins date back to about 430 to 424 BC and possibly even before that. During this period, it’s argued that typhoid decimated a third of the population in Athens.

As you can imagine, the west before and during the early 1900s was not as developed as it is today. Water borne diseases were rife, with drinking water being sourced from open wells and rivers or provided by suppliers who were not subject to stringent regulations.

Early iterations of drinking fountains supplied water at room temperature, which made it a perfect breeding ground for bacteria. In 1906 two innovators by the names Halsey Willard Taylor and Luther Haws sought to develop a dispenser with the sole purpose of reducing the risk of typhoid and other water borne diseases. Their solution was a water cooler, a dispenser that would chill water, thereby eliminating micro-organisms that could result in disease.

Halsey Willard Taylor’s and Luther Haws’ water coolers made use of ice sourced from rivers to chill water, which also presented a problem as this open source could also have surface water. Haws would go on to patent the water faucet in 1911, and by 1938 water coolers began to make use of electricity and new laws made it possible for water to be treated more effectively, thereby reducing typhoid infections drastically.

In modern times, the water cooler is now a more preferred source of water over a variety of alternatives thanks to its cost effectiveness, portability and, of course, provision of safe drinking water for all to enjoy.