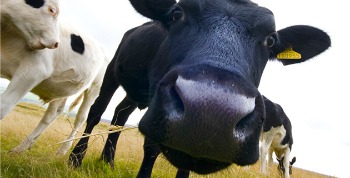 Of all the technological advancements taking place in the World today, this seems to be one of the most impressive. Snappily named the McLanahan Nutrient Separation System, this recent technological development from Michigan State University involves putting waste into an anaerobic digestion and filtrations system to turn it into water that is clean enough for animals to drink.

Over the years, many farmers have already been putting their cow manure into digesters to decompose safely and to produce methane gas for electricity. This was because of the risk that comes with not managing cow waste properly. If manure enters into a water source and is able to decompose in it, they can deplete the dissolved oxygen inside of it. This can lead to the death of fish and aquatic life in the water, as well as an increase in nitrate levels that can cause a fatal blood disorder if it’s consumed, which is called Baby Blue Syndrome.

With so many negative side effects that can result from the mismanagement of manure disposal and decomposition, it’s clear to see that the easier technology can make the process, the better. Because cows produce an enormous amount of poop, it’s important that the system be capable of handling the vast amount of manure produce on a daily basis. To this end, the McLanahan system is a welcome advancement!

When it comes down to it, manure is about 90% water, but it contains large amounts of carbon, pathogens and nutrients. In order to turn the manure into drinking water, the system is more sophisticated than the previous digesters that farmers have been using. In this way, it is capable of extracting the nutrients – such as ammonia – so that what’s left can be used as fertilizer without harming the environment.

Besides that, the system is able to produce 50 litres of water from 100 litres of manure, with the team who produce the machine intent on upping this turn out to around 65 litres in the future.

Luckily for all of you farmers out there, the plan looks set to commercialize the system by the end of this year, making it readily available to everyone who needs their cow poop problems taken care of.