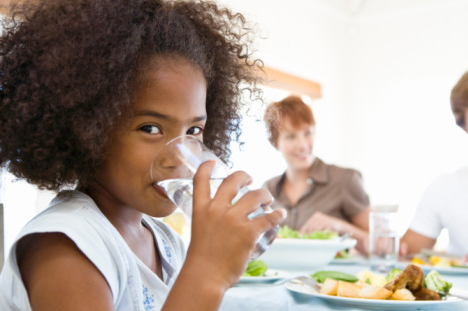 Public Health England recommends water at mealtimes – and nothing else

Childhood obesity has reached crisis level in the United Kingdom. And in response, Public Health England is set to roll out a plan for cutting the nation’s sugar intake. A major point for this strategy, is that “children should be given only water to drink with meals,” since nutritional scientists have claimed sugary drinks are nothing but empty calories that get people “out of the habit of drinking water” with meals.

While the recommended daily limit for calories that come from sugars is no more than 11%, all age groups in the UK, particularly children and teenagers, struggle to stick to that target, as indicated by the graph below.

Professor Susan Jebb, of the University of Oxford, urged parents to “choose something else.” She continued by saying, “it comes back to simple advice to parents – encourage your children to drink water. Once they’ve been weaned, ‘children should be drinking water’ is absolutely the message. Milk is fine, but that should be the mainstay of our advice.”

By recommending that families put water on the table, nutritionists hope that this will help the nation address the impact of sugar on health and its link to obesity. Emerging evidence even indicates that getting a large percentage of daily energy from sugar may be more damaging than previously anticipated, as it increases the risk of heart problems and type-2 diabetes.

Public Health England’s recommendations to keep children away from sugary drinks follows in the footstep of the World Health Organisation’s views that sugar should constitute no more than 10% of energy intake, and that people should aim for lower than 5%. In an effort to help UK citizens reduce their sugar intake, Public Health England and the Scientific Advisory Committee on Nutrition have even considered proposing tax on soft drinks, while simultaneously targeting the sugar intake of children and teenagers.