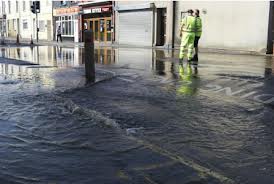 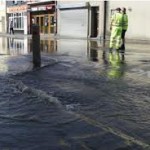 Welsh Water had to give out bottled water to vulnerable people after flooding cut off the water supply to 3,000 people across Llanelli.

A burst pipe meant many homes and businesses in the surrounding area were left without water for six hours.

The rupture also caused a large flood in Station Road, where the burst pipe was, which people described as being like a “tidal wave”.

A spokesman for Welsh Water said it was “standard procedure” to deliver bottles to people on their Additional Services Register, which caters for people with health issues requiring constant water supply, such as those on dialysis.

He added: “Water mains do burst, unfortunately, and our job is to get them repaired as quickly as possible.”

Asked how many bottles were dished out, he said while it was not possible to get that exact information it was a “small number”.

During the incident residents in the street spoke of their alarm at seeing the road and pavement submerged.

Resident David Nicholas said: “[The water] was coming at such a rush that I thought it was a tidal wave. Then I noticed it was coming out of the ground. It flooded very quickly to about eight or nine inches. People were jumping into doorways to get out of the flow.”

In situations like this, prompt delivery of an alternative source of water is essential. The Water Delivery Company offers a similarly prompt service for all of our customers, whether or not it is an emergency, so that you have all the water you need, exactly when you need it.