Interesting news regarding the contaminated Zam Zam holy water being sold in the UK. 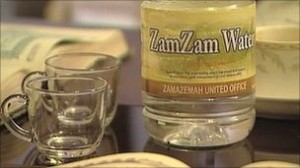 The president of the Association of Public Analysts said he would “certainly would not recommend” drinking it. Holy drinking water contaminated with arsenic is being sold illegally to Muslims by UK shops, the BBC reported. Zam Zam water is taken from a well in Mecca and is considered sacred to Muslims, but samples from the source suggested it held dangerous chemicals.

Tourists can bring back small amounts from Saudi Arabia, but it cannot be exported for commercial use. An undercover researcher found large quantities of bottles being sold in east and south London, and in Luton. The president of the Association of Public Analysts said he would “certainly would not recommend” drinking it. For the original article please see this link to the BBC website.

A short documentary on the water is shown below – source not verified.