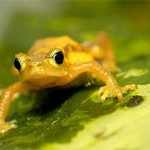 We’re big water and animal lovers at water cooler Lambeth, and as a result, we particularly like stories where the two find themselves combined in a tale of love, life, tragedy and happier ending….
This week we’re finding out about the utterly adorable spray toad, which resides the in the spray created by the waterfall of the Kihansi River in Tanzania. The tiny toads were living and breeding happily, until a dam project completely altered their natural habitat. Without the velocity of water coming through the gorge the toads lived next to, the creatures became extinct in the wild.
All hope is not lost though, as 4,000 of the toads reside in Ohio, under the protection of the Wildlife Conservation Society and Toledo Zoo. The Bronx Zoo is hoping to open an exhibition in the near future, which will display them to the public.
The issue of these tiny creatures has raised many bigger questions, such as how much effort should go into saving one species, particularly smaller amphibians, which have been the worst hit by global warming and climate change; it is though over 120 species have become extinct in recent years.
If you have any comments on this story, please do get in touch, or indeed leave a message at the bottom of the blog. We always love to hear from you!