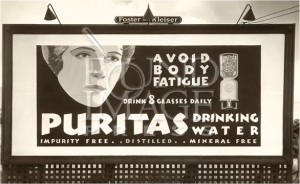 The Water Delivery Company is chuffed with itself. After many months of searching both the UK and the USA we have in our hands an original glass 19 litre (5 gallon) bottle.

The bottle was designed to be used on top of water coolers and was returned to Puritas after use for cleaning and refilling with distilled water.  Arrowhead Puritas were one of the dominant forces in water delivery on the East Coast of the United States at the turn of the 19th century.

The US water delivery market at the turn of the century was based on distilled water and interestingly the purified water market in the USA is still a major force. Whereas in the UK demand for  spring or mineral water dominates.

We date the bottle to 1937 – based solely on the fact that there is an inscription on the bottom of the bottle saying L37 – but it may be from much earlier than this. The bottles were delivered in wooden crates to protect the glass during transportation – and interestingly plastic water bottles in Hong Kong are still delivered within crates – albeit plastic ones.

After trawling the internet we found some nice detail on the Puritas Water Company from the turn of the last century.

“In 1898, the Los Angeles chapter of the Women’s Christian Temperance Union (LAWCTU) protested to the Puritas Water Company against its use of a semi-nude figure in a billboard advertisement. In a letter deploring the impropriety of the Puritas advertising campaign, the LAWCTU complained that the “almost nude figure” in the billboard was “offensive to the wives and mothers of Los Angeles, and…demoralizing of our young people.”

Finally a You Tube Video (apologies for the funny angles). We promise that we have finished with this project now.

Sorry – we told a small lie – see the coverage of our blog in the Cooler Innovation magazine below. This blog is now closed.