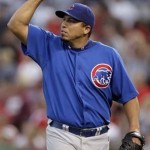 We’ve been doing a little bit of research into the abuse of various water coolers as part of sporting events, and have become somewhat alarmed at our findings. It seems that when players of particular sports (namely basketball, baseball and American football) become aggravated, they take it out on the nearest piece of machinery they can find, and use brute force to attack it until they are satisfactorily calmed. As we may be able to predict, the consequences are not always so good as the momentary satisfaction of smashing something heavy…so we’ve decided to give some extremely non-official awards to our favourite silly sportsmen who embark on water-related revenge, named “The water cooler London muppet awards”.
In third place comes Carlos Zambrano, who, after not quite managing to catch out a player on the opposing baseball team and then being sent off for foul play, threw his ball into the crowd at a considerable speed. Not content with this show of temper, he then took a bat to the Gatorade machine at the side of the pitch. Shame he didn’t think too much about his teammates, who, still playing, would surely be in need of refreshment at some time during the rest of the game. Hmmm.
Next week, we reveal the winner of the second place award, and you get to read another wonderful blog entry. We look forward to seeing you here!