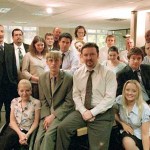 The well-loved institution that is British comedy seems to have done nothing but get better and better throughout the Naughties. Series such as Peep Show and Green Wing entice audience onto their sofas week after week, along with golden oldies that remain some of the best shows around (who watched Monty Python this Christmas? We certainly did). We must not, however, forget one of the most talked about classics of the decade- The Office. Proving that the office water cooler is definitely the most interesting place to be, at any time, and that the chat around it is to be marvelled at, Ricky Gervais and his genius team of writers and actors created comic gold. With lovable characters such as the awkward Gareth, and the shy Tim, along with the cringe worthy David, the show delves into the secret life of pencil-pushers, most of which hits the right note because we recognise something of ourselves in what we see on screen. The Office began in July 2001, and ran for two incredibly successful series, as well as filming two Christmas specials.
If you have another favourite “water cooler” drama that we have overlooked, do get in touch and enlighten us- we always love to hear from you!