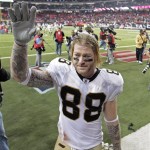 We can safely say, the machines that we supply at water cooler Islington are not hazardous. Unless you kick them with undue force, of course. An American football player is sitting out this week after injuring his toe after swinging his foot at the locker room water cooler in a fit of rage (what he was angry about, we may never know or understand). Jeremy Shockey, who plays for the New Orleans Saints, has had rumours flying that there may actually more to the story than originally thought, and that the offending digit is not the end of it. Shockey is said to have engaged in a heated argument with his coach after he wanted to play in a game shortly after his acquired the injury. Their season is drawing to a close, and it seems the players are all on edge after several defeats and a few of their top scorers also sitting out.
So, from this, we give this advice: If irritated/annoyed/aggravated, take your feelings out on something softer. By this we mean a cushion/cuddly toy/mattress. Not anything else. Or you might be out of a game or two.
If you have any questions, or any information about protective footwear, please do get in touch and share your wisdom with the world. We look forward to hearing from you!