It’s finally happened- a satirical musical has been penned about the life and times of a water cooler (or rather those who gather around it on a daily basis for idle chitchat and gossip- of which most of us are one too, I feel), and is being 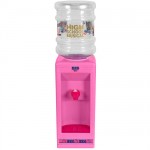 performed at the Lakeshore Theatre in Chicago. In the words of the producers, “The Water Coolers: An Office Musical” is a comedy about trying to balance it all, something I’m sure many of us can relate to.
The critics, however, don’t necessarily agree. Chris Jones asks if, after a hard day at work, “Do you then want to head to the theater and pay good money to relive on your own time the existential humiliation of office life?”. Fair point, we cry. Personally, after leaving the office, where there are in fact (funnily enough) many water coolers knocking around, I prefer to either sit with my feet up in front of something wonderfully escapist and non-water related, or indulge in other forms of recreation which do not remind me of the place I spend my working hours. Even though it is hoped by the creative directors that this production will be a milestone in establishing an unusual and innovative programme for the theatre, it has been noted that their usual audience is in fact a little younger than the usual ‘water cooler’ crowd, raising doubts that this show will raise the theatre’s profile and really make a mark in the audience’s minds, encouraging them to come back time and time again. A “nice but forgettable” look at office life, maybe we shouldn’t book our tickets to the Windy City just yet, but if you’re gagging for a bit of drama surrounding your water cooler, check out what we found (see iserted image). Something quite special, we’re sure you’ll agree.
The show runs until October 24th 2009.