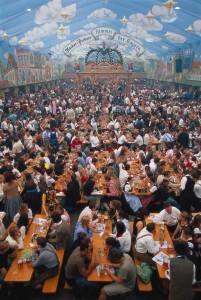 The annual Oktoberfest was held recently in Munich much to the delight of the numerous beer festival goers. Although most people only visit the festival for two to three days, the entire festival actually runs for sixteen days straight and attracts close to six million people every year. The festival has been very popular amongst the German youngsters and the popularity has spread across the globe, with people flying from all across the world to be there and experience the German party.

The very first Oktoberfest was in 1810 but back then it was known as Oktoberfump and was held to commemerate the marriage of Crown Prince Ludwig and Princess Therese of Saxe-Hildburghausen. It was not held the following year due to Bavaria being involved in the Napoleonic war then five years later the celebration returned and grew in size and popularity year after year.

Nowdays the festival is filled with amusement park rides, food stalls and of course, the most famous part of the festival, the beer tents/halls. With so many people crammed in the beer tents all drinking litres and litres of beer every hour it’s no doubt people are going to get dehydrated. This is why it’s ridiculously important for people to drink at least one glass of water to every stine of beer they consume. Of course, this is quite a difficult task as you can’t get up out of your seating area very easily to go outside and buy a bottle of water every hour or so, as someone try and snuffle your table while you’re gone! So most people just sit there getting drunker and sicker from drinking beer after beer with no water intake at all for up seven hours!

So wouldn’t it be a much better idea if the beer halls were equipped with water coolers  inside so people could easily keep well hydrated with minimum effort? It would save a lot on cleaning as well as I’m sure there would be less vomit in the bathrooms and on the floors if people were drinking water at the same time as their beers. The Water Delivery Company in London would like to see some water coolers in the beer tents at the next Oktoberfest and if they have to take them over themselves in their luggage when they fly over for it, then so be it! Everyone needs to have easy access to purified water no matter where they are!

If you would like water coolers for your home or business please contact The Water Delivery Company on 0845 006 3309 or send us an email at  contact@thewaterdeliverycompany.com and we will do our best to ensure we meet your water needs.