The bottled water industry – that ‘Aunt Sally’ target for environmental criticism fights back and shows its determination to Save the Earth!

I’ve written before, on The Water Delivery Company blog site, about my frustration with lazy journalists writing about the damage water bottles and bottled water generally are doing to our environment. In an effort to present a more balanced argument,  I’ve been doing my own research into what the industry is doing to clean up their own act – with some interesting results!

Silver Medal Awarded by Cradle to Cradle to Nestle Water

Nestle have suffered from a poor reputation for many years within the bottled water and water cooler industry. As the previous owners of  Powwow, Nestle were infamous for complaints of poor customer service, badly run accounts departments and unhelpful/grumpy drivers. They sold that company off a little time ago, and whilst Powwow continued to be dogged by ever-escalating customer complaints, it seems that a new shiny, environmentally responsible Nestle water business is emerging from the ashes.

Their latest venture looks like its addressing the environmental issue head on – and was even awarded a Silver Medal by the Cradle to Cradle organisation which looks to promote and reward environmentally responsible corporations . With their new company Re-source Spring Water, recycling has been brought to the core of the company ethos.

Re-Source point out that of the total landfill, discarded water bottles make up less than 0.03% – but, commendably, they quickly add that this is still too much and then they set out just how they – and more importantly WE – can reduce this figure even further. Efforts include a recycling commitment for refundable bottle deposits  and lobbying for more accessible recycling points. They are also actively trying to engage with the younger consumer – on the basis that if we educate that group of environmentally aware people, then we/they are investing in a long term mind shift towards more responsible consumerism. 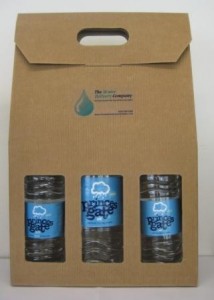 Critics could decry their efforts by dismissing them as a mere marketing strategies – maximising positive PR, harnessing the younger, environmentally-conscious crowd luring them into the bottled water purchasing market – but for me the strongest evidence in against this accusation is the incredible amount of work they have done  lobbying for a refundable deposit system on individual water bottles. Nothing focuses a consumer’s mind like a cash incentive. Not to mention the potential for kids scouring every kitchen bin and neighbourhood for the bounty promised by returning discarded water bottles. This work alone has incurred legal costs already into the millions of dollars. (Read the finer details of their legal battle, alongside the IBWA, in this article on the FoodBev.com industry website .

A major part of this legal campaign is to impose legal responsibilities on local councils to ensure they are providing sufficient recycling facilities for plastic bottles – a particular sweet sidepoint. It could be argued that these ‘holier than though‘ councils, who sanctimoniously cancel their contract for bottled water with water delivery companies already struggling through a recession,  seem to be less forthcoming when it comes to putting up their hands in the ‘lets have more recycling plants‘ vote.

Don’t get me wrong – I’m as opposed to public money being needlessly wasted on unnecessary water bottles as the next person.You need to get the facts about the particular circumstances of the relevant public offices before swallowing unchallenged the ‘Im doing my bit ‘ public image that so many of our politicians and councillors like to trot out. This trot is an easy-target for the ‘ready to print a populist trite story’ journalists we seem to be overcrowded with in this country.

The bad news… all this campaigning is taking place in the States. As I mentioned before, undeniably, Nestle ultimately will be the primary beneficiaries of any change in legislation of this type – but, equally undeniably, they are the ones who have dug deep – very deep – into their legal budgets and taken on this huge campaign which promises to benefit everyone. Definite benefits to  consumers, bottle manufacturers, the water companies, AND the environmentalists – everyone but lazy journalists who dont seem to have picked up on this story…

(Apologies…I will EVENTUALLY get off my anti-journalist soapbox!)  Lets hope this is another thing that the UK will eventually be forced to follow suit on.